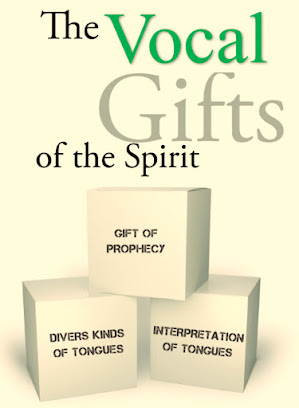 There are three vocal gifts. These are the speaking gifts of ‘all utterance’ (1 Corinthians 1:5) where we ‘speak as the oracles of God’ (1 Peter 4:11). The Vocal gifts are Spiritual gifts that say something. They are:

2)   The gift of Diverse kinds of Tongues

3)   The gift of Interpretation of Tongues

The Gift of Prophecy

Prophecy is a supernatural utterance in a known tongue. It is the speaking for or on behalf of God by the direct inspiration of His Spirit.

The Hebrew of "to prophesy" means “to flow forth, to bubble forth like a fountain, to let drop, to lift up, to tumble forth, and to spring forth”. The Greek word means “to speak for another”. We are told to desire to prophesy (1 Corinthians 14: 1, 39) because, in congregational settings, it provides a refreshing flow of God’s healing and restoring words to others.

Prophecy is for today (Joel 2:28; 2 Peter 1:19; Acts 2:16-18) and every believer is able to move in the Manifestation gift of prophecy, but not all who prophesy have the ministry of prophecy (the Motivational gift) or operate in the office of Prophet.

Prophecy can be spoken (Jeremiah 32:6-8), sung (Ephesians 5:18-19), with musical accompaniment (2 Kings 3:15), prophesying on an instrument itself (1 Chronicles 25:1), written (Habakkuk 2:2), expressed in dance and other creative mediums (Exodus 15:20) or come in the form of a dream or a vision (Numbers 12:6). This gift is highly commended by Paul as it is understandable and immediately builds up and comforts those listening to it if used properly (1 Corinthians 14:1, 5). The anointing to prophecy is frequently quite powerful but is still under the control of the believer (1 Corinthians 14:32).

A prophecy can be for a particular group of people (or person) at a particular time. All prophecies must be judged by the witness that is felt by the body of believers or the individual it is spoken to (it must agree with the Bible, confirm what the Spirit is already saying and bring comfort and edification). Next week I will be speaking more about how to rightly judge prophecy in the church.

Where the witness is strong hearts may be greatly stirred and a sense of excitement can grip a whole congregation as all sense the presence of the Lord (1 Corinthians 14:29-33, 40). We need to be very careful about personal prophecies; lives can be ruined through the misuse of this gift. That is why there is a need to practice discernment and correction in the Body.

There was one time in Sarawak that I prophesied over a teenager that she should get her house in order and then revival will come into her life. Later I was summoned to her house because she had taken my word too literally and started to move things around the house to the anger of her parents. There was a tense atmosphere in the house, and I had to explain that the prophecy meant she should sort out her own life by coming to the Lord in repentance. The house the prophecy referred to was her life not her family home! Thank God she responded positively, and things were sorted out. If I had not gone there to correct the delivery of my prophecy things could have been pretty bad for that girl and for that family.

Personal prophecies usually confirm what the person has already been gleaning from the Lord. Often prophecy will confirm a person’s ministry and act as part of setting that person apart for or on the right track to the ministry (Acts 13:1-4). While I was in Bible School I had many prophecies that agreed with my inner witness that I was to be polisher or trainer of Bright Arrows to be sent out of fire and on fire for Him. This is what I see my ministry being today.

If the person prophesying does not have the ministry of prophecy and is not a Prophet then the prophecy will usually be very general and be purely one of comfort, edification, and encouragement. Those called to a prophetic ministry will minister more specific words and even directional or corrective prophecies, but with God’s wisdom and compassion so that ultimately, they lead to comfort, edification, and encouragement.

The following diagram shows the four levels of Prophecy.

The most basic level is the operation of the Manifestation Gift of Prophecy, which we are looking at here. Any Spirit-filled believer can move in this gift as the Spirit wills and it will be a basic message of encouragement, exhortation or comfort. At this level it will not usually contain a warning or a message about the future and will be more general in content, speaking forth scripturally sound words to build up the hearers.

Next comes the Motivational Gift of Prophecy which is a person’s ministry of prophecy that will be deeper and richer that the first level. Not all move in this level of prophecy and a person who does may speak, sing or demonstrate more specific prophecies to individuals or groups. Prophetic ministries vary from those who simply stand and speak the oracles of God to those who are prophetic worship leaders, prophetic singers or instrument players, prophetic dancers or prophetic creative arts ministers.

The penultimate level would be the Ministerial Gift of Prophet. All Christians can prophecy, not all will have a prophetic ministry, and even fewer will move as Prophets. The Prophet speaks forth the deepest form of Prophecy and can speak more powerfully, specifically and to a larger audience, even to nations but they have the greatest responsibility and judgment if they get it wrong! Agabus is an example of a New Testament Prophet who bound Paul with his own belt and prophesied, “In this way the Jews at Jerusalem will bind the man who own this belt” (Acts 21:11).

However, even the Prophet cannot speak revelation that goes beyond the top level of Prophecy, the Word of God, Scripture itself. All other levels of prophecy must come under the authority and scrutiny of the Word of God.

The Gift of Diverse Kinds of Tongues

Speaking in diverse kinds of tongues is the public supernatural utterance in an unknown tongue.

These are languages that have never been learnt by the speaker, nor understood by the speaker, nor understood by the hearer (unless the tongue is in their language so that they are the automatic interpreters of that tongue). It has nothing at all to do with linguistic ability, with the mind or the intellect of person speaking but is given supernaturally by the Spirit.

There are two types of tongues:

1.   Private tongues for personal edification, devotion, prayer and so forth (1 Corinthians 14:18-19 – “I thank my God I speak with tongues more than you all; yet in the church I would rather speak five words with my understanding, that I may teach others also, than ten thousand words in a tongue.”). Private tongues can be used in corporate settings where all join with their private tongues to prepare and build up the spiritual atmosphere (speaking or singing in tongues). However, this must be something the church leadership and members agree with.

2.   Public tongues that need to be interpreted (1 Corinthians 14:5) – this refers to the Manifestation gift of Diverse Kinds of Tongues that I am looking at here.

This Manifestation gift is referring to the public tongues that must operate with Interpretation of tongues to be edifying to others. It is especially a sign to unbelievers (1 Corinthians 14:22-23) as it was in Acts 2:6. (“And when this sound occurred, the multitude came together, and were confused, because everyone heard them speak in his own language.”)

It may be in a human language that the speaker does not know but some of the listeners understand, just as it happened at Pentecost (Acts 2). One of our teachers at Bible School, Les Garrett, testified how once he had one couple from Papua New Guinea come towards him at an altar call. He started praying in tongues aloud as they approached as he was not sure how to pray for them. Suddenly the couple fell to their knees weeping. Les found out that he had spoken in their language, which he did not know at all, and was praising God and glorifying His name. They were not believers and this gift caused them to really cry out to the Lord and give their lives to Him.

More frequently it is in an angelic language that needs someone to vocally interpret in the common language of the gathering. In the above story it was a human language that the speaker had not learnt. This was the case in Acts 2 on the Day of Pentecost where the disciples spoke in real human languages they did not naturally know.

If others do not interpret the tongue, we should be willing to do so ourselves. The Holy Spirit should give us the unction to bring forth tongues in a public meeting but it must be exercised in an orderly way, no more than three utterances being given in one meeting (1 Corinthians 14:12-13, 27-40).

The Gift of Interpretation of Tongues

The interpretation of tongues is a supernatural speaking forth in an understandable language of that which has been said in an unknown tongue.

The interpretation often comes across as a prophecy, but the exact words will be directed to God rather than from God:

“For he who speaks in a tongue does not speak to men but to God, for no one understands him; however, in the spirit he speaks mysteries.” 1 Corinthians 14:2

On the day of Pentecost, the disciples spoke in other human tongues concerning the wonderful works of God (Acts 2:11). These were worshipping tongue.

Once on a mission trip to Malaysia, I was ministering in a church and praying for people at the altar call. One church worker was ministering with me. This worker was praying for a sister in her own language (Malay) that I did not understand. Immediately after she prayed for the sister, I prayed over her with the church worker still there. I prayed first in Tongues and then interpreted this tongue into English. The church worker’s eyes were getting wider and wider as I spoke, and she looked genuinely surprised. It turned out that my prayer in English was exactly the same as her prayer in Malay. It was a prophetic prayer encouraging the sister to open up as a beautiful flower and release the fragrance of the Lord and glorify God in her life. This was a prophetic tongue.

The purpose of this gift is to render understanding of tongues to the hearers so that the whole congregation or an individual may be edified.

Later in 1 Corinthians 14:39 Paul writes, “Therefore, brethren, desire earnestly to prophesy, and do not forbid to speak with tongues.”

From these passages we can conclude that:

1.   Prophecy is from God to man whereas the Interpretation of Tongues is in the form of man to God (v2).

2.   When one speaks in tongues, they speak the mysteries of God (v2)

3.   One who prophecies speaks edification to man (v3).

5.   Prophecy is greater in a public setting because it directly edifies the Church without need of interpretation (v5).

6.   Do not forbid anyone to speak in tongues. However, it is better to desire prophecy in Church meetings (v39).

7.   With interpretation it edifies the Church.

Let us pray now for the release of the vocal gifts in our lives.

Now that we have looked at all nine manifestation gifts I would like to talk about the correct use of these gifts, especially the spoken g... 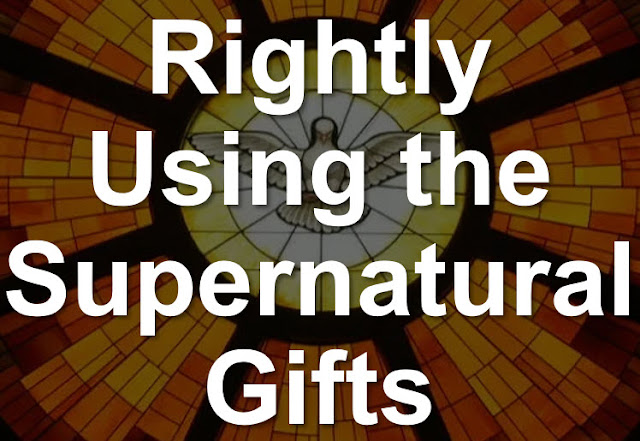 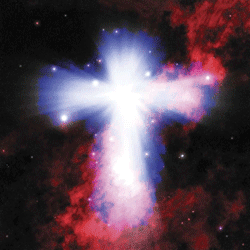